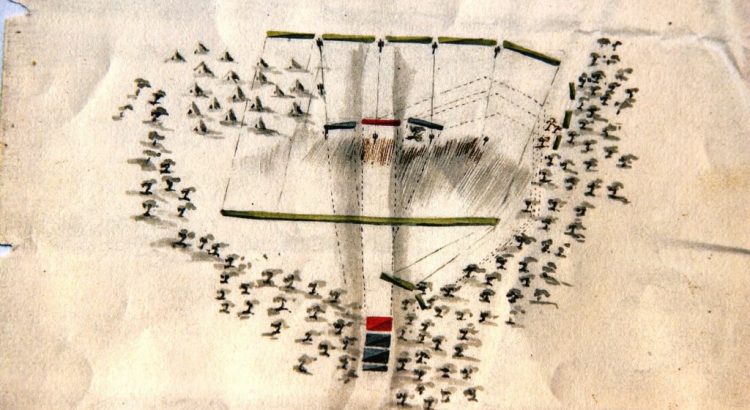 The battle of Caulk’s field took place in Kent County, Maryland during the war of 1812. It involved American militia trying to repel the landing of British forces. The battle ended in American victory. Some structures and places stood out as being of significance during this war. we take a look at several of these and the roles that each structure/place played in the war.

A few days before the battle of Caulk’s Field, the leader of the American militia. Philip Reed used the island to mislead the oncoming British forces in regards to the size of the militia. This happened in a rather interesting way. the Britons, from their camp had a good line of view of the American militia at the island. The Colonel instructed a few of his men to walk past the waterfront from the mainland and back again. This led the British to believe that their enemies were far outnumbered. however, the man leading the British forces at the day of the battle admits to have been surprised at the site of their enemies’ militia and regular troops occupying the whole coast.

The original structure was the home of Major Thomas Mitchell. The British raided his residence in 1814 and took him prisoner. the British Believed that Maj. Mitchell was the commissary for Maryland. It is also beleived that the British forces leader, Peter Parker was taken to the house after being wounded in battle. Word has it that the British held Maj. Mitchell prisoner in England for three years. The current Inn at Mitchell House was built later in the year 1825.

One week before the battle, a British ship, H.M. Menelaus landed at the Swan Creek led by Peter Parker. the forces from the ship raided farms in the area. In 1814, royal vessels, still led by Peter Parker fired rockers at Henry Waller’s house in Fairlee creek and burnt his house and barns to the ground. Both creeks were basically landing areas for the British forces.

Turner’s creek was an area with quite a number of residents in the early 19th century . In 1813, the British vessels landed on Tuner’s creek and forced one of the residents to be their pilot. What followed was a raid of towns and burning of property. A structure there -Knock’s Folly- was built by George, son to Donaldson Yeates who operated a business in Turner’s Creek.

Also known previously as memorial park, the county seat of Kent County played significant roles in the war of 1812. The town was on the western shore of Kent county along the river Chester. In as much as this was an advantage, the location gave British forces an easy time targeting and raiding houses for supplies and provisions. The western side of the county also happened to be the battleground for the famous battle of Caulk’s field. Chestertown was home to several significant people during the war. Some of the structures include Widehall and Dougherty Barroll house, homes to Ezekiel Forman and Hopper Nicholson.